skip to main | skip to sidebar

No country for old men

Fact one: there is a Russian folk saying, “Chicken is not fowl and Bulgaria is not abroad” (I am sorry I cannot quote it in original; my Russian is a bit tired today!).

Fact two: since the beginning of the Ukrainian crisis, people in Bulgaria have grouped in two opposite “parties”: the putinists and the antiputinists. It is interesting that almost everybody has taken a stance, no matter of his or her previous political affiliation.

Fact three: I have overheard myself an old woman in Bucharest (Romania) whining about the hardships of living in “this damned capitalism”, expressing regrets for “the shiny times” of president Ceausescu and concluding: “If the Russian come and take over, maybe life will be worthy again, who knows…”.

My theory: the poor have no homeland (Romanian: “Sarantocii n-au patrie”). All these poor people in Romania and Bulgaria have no sense of patriotism, even if they invariably vote for the most extremist political party in each country (Romania Mare party in Romania and Ataka party in Bulgaria). Remember that these two countries are the poorest in the European Union (Croatia, that has been admitted in EU six years after them, is a far richer country), and their press in Europe is very bad; ergo, the majority of citizens in Romania and Bulgaria are not only incredible poor, but disillusioned with EU and very embittered because of their “paria” status inside of the EU.

A conclusion? If Russia wants to get these two countries, it will get them without a firearm. The enormous mass of poor people will do anything what Russia tell them do: killing their own national elite, for a start.

Etichete: ataka, Chicken is not fowl and Bulgaria is not abroad, No country for old men, Sarantocii n-au patrie, the poor have no homeland, Ukrainian crisis 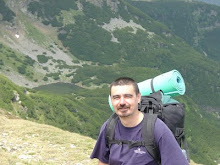 Mihai Buzea
I am who I am. Someone had to be. If you like to call me names, you'll find me at mihai.buzea@gmail.com